At the beginning of 2018, I wrote on the pros and cons of the Glock 19X 9mm. Since then, Glock produced and released the models 45, 43X and 48. All chambered in 9mm, the three weapons fit distinctly different niches in the law enforcement officer’s sidearm needs.

The G45: A long awaited request Glock 17In the early 1990s after purchasing what was then a brand-new second-generation Glock Model 19 9mm (15+1 capacity), I voiced my eagerness for a Glock 17 framed weapon with a Glock 19 size slide assembly. This desire for such a weapon would go unfulfilled until 2018 when they introduced and released the 19X, a full-size frame that held Glock’s 17-round 9mm magazines beneath a shortened barrel and slide assembly the same size as their midsize model 19 (hence the 19X nomenclature).

Originally manufactured for submissions to the U.S. Army as part of the Army’s search for a replacement sidearm, the Glock 19X was sold, where legal, with one flush fit magazine (17 rounds) and two extended magazines holding 19 rounds each. There were a few other minor design features specific to the Army’s requirements but overall the 19X was the “Glock 17 Commander” some had wanted for so long. Many agencies and off-duty officers, however, took issue with the Coyote Tan color—it didn’t look as good in a duty holster and just didn’t seem as aesthetically appealing as a black or blued weapon would.

In response, the Model 45 was released later in 2018. It incorporates the same frame and slide assembly sizes, full frame length with 17+1 capacity under a mid-size slide assembly, and did away with the Army-specific design features many agencies either didn’t need or didn’t want. For the small percentage of duty assignments that did require a specific design feature, i.e. the lanyard loop, aftermarket parts are plentiful and cost effective so the agency armorer can modify the weapons easily and quickly.

Specifications for the Model 45:

If you compare the G45 to the fifth generation Glock 17, you see that the barrel and slide assembly are approximately 0.5” shorter. That also results in a sight radius that’s about 0.5” shorter as well. Do either of these differences matter in the real world? In other words, do you need that extra 0.5” of barrel or 0.5” of sight radius? Realistically, the answer is no. Sure, in a world where everything is measured with a micrometer and the gun is only fired from a fixed ransom rest, this difference in length might matter. Even then, the difference would be so small as to be statistically insignificant.

Where that 0.5” matters is in the holster and under concealing garments. That difference does have an equivalency in weight and comfort. If you own a G45 you can, theoretically, not have to buy a second gun. If you are issued a G17 and then buy a G19 for off-duty, you’d split the difference and only need one gun if that gun was the G45. So, if your agency bought and issued the G45, how much would the off-duty gun be necessary? Those of you who are always looking for justification to buy another gun can pretend you didn’t read this paragraph. 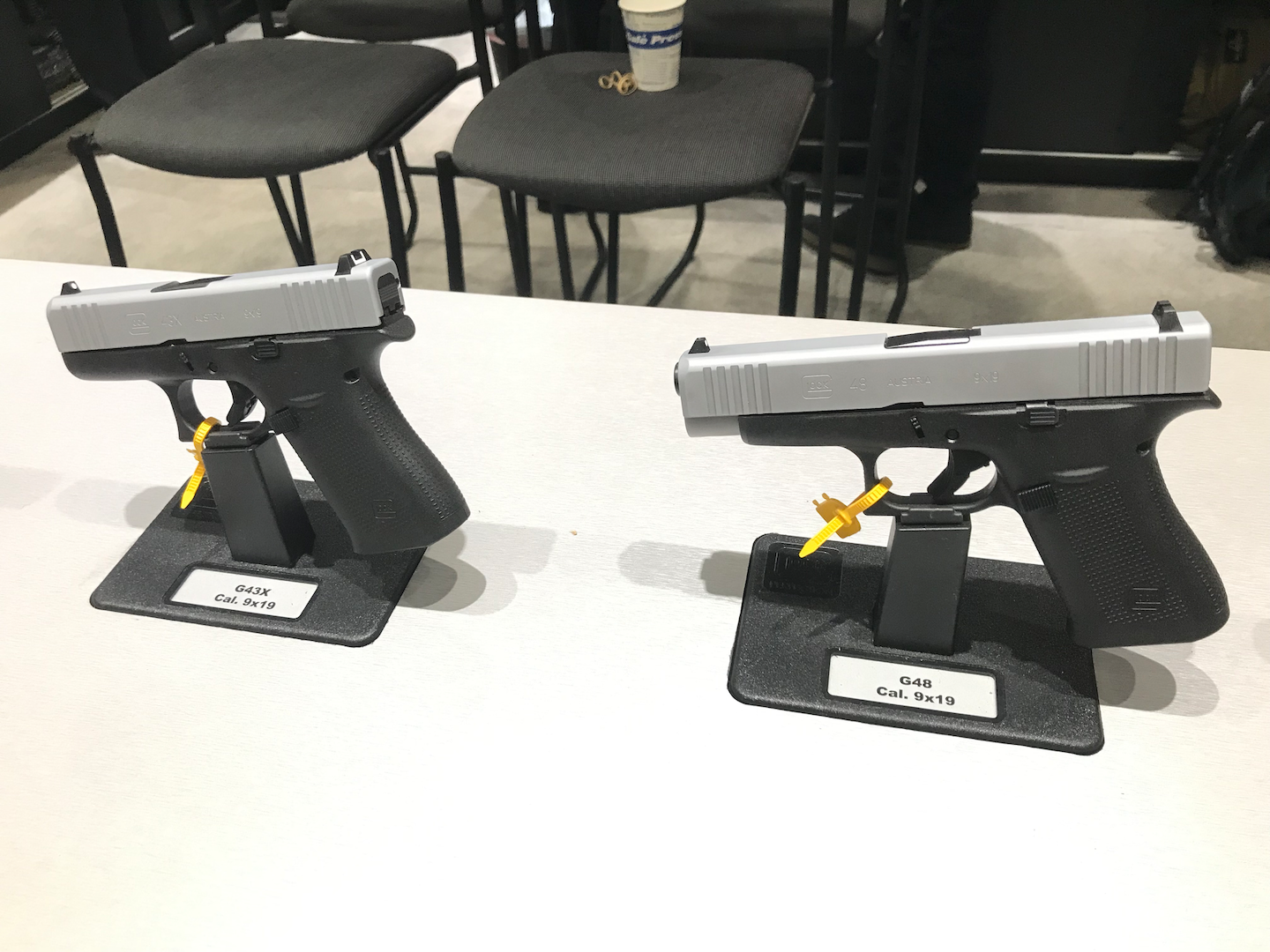 Glock has hit a homerun with the G43, 43X and 48. Shooters who already own a G43 voiced their intent to purchase a G48 and, with the ability to switch out the slide assemblies, effectively also have a G43X in their personal armory.

The Model 26 is a shortened version of the G17 and G19, shortened both in frame and slide/barrel length. The double stack magazine holds 10 rounds of 9mm. The challenge is, however, that even as compact as it is, the grip circumference is still more than comfortable for some folks with small hands. That same challenge is a problem with the G19 and G17, and every other Glock or similar capacity handgun with double stack magazines. What can be done about it?

The Glock Model 43 was released with a single stack 6-round 9mm magazine. Considering the fact that for decades off-duty officers carried revolvers holding either 5 or 6 rounds of ammo—and some actually carried a backup load in a speed strip or speedloader—the available rounds of 9mm in the G43 seems sufficient. Add in a backup magazine or two and you can have 13 to 19 rounds of ammo available. The grip on the G43, however, received the same complaint as the G26, not about circumference, but length. There is no place to put the pinky finger of the shooting hand. Some people fix this by changing out the magazine base plate so that there’s an extension and others just replace it with expanded capacity base plates.

Listening to the feedback and seeing the need for a larger capacity and longer barreled 9mm handgun, Glock produced the Model 48. With a 10-round staggered (but not double stack) magazine, it still has a slimline grip but with room for all of the fingers on the shooting hand. They also added about 0.75” onto the barrel and slide length making it just over 4” instead of just under 3.5”. Even with the increase in capacity, the frame width didn’t change. Someone smart at Glock realized that by putting a G43 slide assembly on a G48 frame, you could have a “full capacity, shortened slide assembly” weapon similar in overall appearance, albeit smaller all around, to the G19X and G45. With that realization, the G43X was born.

Glock has hit a homerun with the G43, 43X and 48. Shooters who already own a G43 voiced their intent to purchase a G48 and, with the ability to switch out the slide assemblies, effectively also have a G43X in their personal armory. With all of that info about the various Glock 9mms, we haven’t even touched on the Glock Model 34 variants (the longer slide competition models chambered in 9mm) or the Glock Model 17L, a long slide 17 without the competition features of the G34. Despite our efforts, we were unable to find any information about the not-released-but-existent-somewhere-in-the-plans Glock Models 46 and 47. If we find anything out, we’ll obviously share it.

If your agency is issuing Glock handguns or authorizes them for off-duty use, check out the new offerings and options. With a history dating back decades and having been carried in virtually every environment on the planet, Glock firearms have a strong reputation for taking abuse and performing as needed when needed.